I Was Going To

It's the first day of spring break.  There is a long list of those items I've been saving for a day when I have time.  Spring cleaning, one might say.  Today was the day to get started on that list.

I was going to clean my room, putting away most of my sweaters and other winter items, but instead I cut a hole in a fleece remnant I bought in Oklahoma and made myself a poncho. 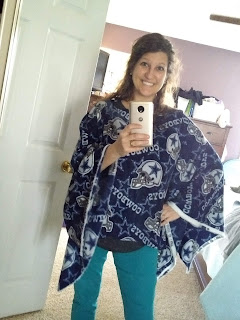 I was going to mate the basket of single socks, but instead I cleaned out the laundry closet, dusting and vacuuming and making it sparkle.

I was going to get organized, make some lists for our plans this week, but instead I took my two youngest to the dentist (I had forgotten about the appointment).  It was a success.

I was going to clean out the fridge and just eat a salad for both lunch and diner, but instead I found the roast I'd thawed this weekend, so we had sirloin tip for lunch and pork ribs from the smoker for supper.  The lettuce that I don't want to waste still sits in the fridge.

I was going to get some fresh air and maybe some sun on these legs, but instead I had a fabulous time vacuuming the whole house with my brand new vacuum (see recent post about old vacuum going ka-put).  We are a dirty nasty bunch.  Sometimes I think I should stick with bagged vacuums so I don't have to witness all our dirt and hair and goo.

I was going to push the veggies and the fruit to the boys, but instead we ate mostly meat and cheese today.

I was going to work toward that ten pounds I'm planning to lose before my sister's wedding, but instead I found some Dove chocolates in my nightstand drawer and ate two, a milk chocolate and a dark chocolate.  They were delicious.

I was going to have my post written early today, thinking of all the fun my day was holding, but instead I kept finding other things to do.  Like this whole list of my day. 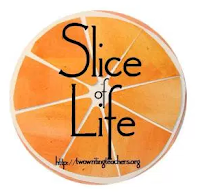 Posted by Emily Culbertson at 7:31 PM