My room holds seven 5th grade students who are heavily engaged in their work.  These kids are recording themselves read their Civil War reports.  The information writing unit is coming to a close.  To celebrate, the grade level is going all out.  This is mostly due to our Literacy Fair and Leadership Night coming up on the 21st.  We're building up to our biggest celebration of the year.

Some students are on laptops, others at the desktop.  We experimented with the iPads earlier, but we couldn't figure out how to work the mic with the website we were using, so we gave up.

It's like a recording studio.  We've posted signs outside the room to let others know about the important work going on within these walls. 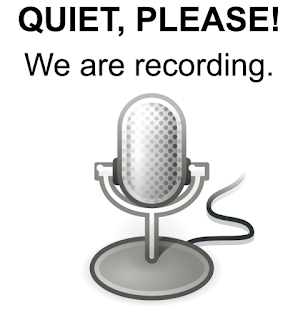 All of the students are taking their recording sessions seriously.  Studiously, one highlights words he wants to emphasize.  The girl next to him has on her headset, equipped with a mic.  She is testing out the recording device for the second time.  Then listening to her voice play back to her.  She smiles.  She must like what she hears.

I've been facilitating the recording most of the morning and after lunch.  The variety of personalities, attitudes, and technological abilities is as colorful as the rainbow.  Some just want to be done with this project, and this recording gets them closer to completion.  Others are perfectionist, recording, listening, re-recording, and on and on.  I think one team of two occupied the corner of the table for almost an hour before they were convinced the recordings were acceptable.

It's like a comedy hour, except some are more dramatic.  Either way, it's been very entertaining.  I sent an email to their classroom teachers thanking them for this fun today.  It's been a while since I've been witness to so many characters in my room!

As I help a boy copy and paste the QR code linking his recording to his report, I overhear the girl at the table behind us.  "That doesn't even make sense!  Hmm....Ok, change that," she's exhausted with herself and this report.  Later, "Oh, man!  I think I forgot to type a paragraph.  I have to go get my paper."

Some students are stressed and others care not.  Some leave smiling and others leave indifferent.  Some students look forward to sharing their work with families and the whole of our elementary world, while others are fine with completing a task and learning about history.

I have been entertained today by students in their natural habitat.  It's been a while since I was needed like this by students.  Some of the kids found independence in figuring out how to record, convert, copy, paste, share.  Most did.  Only a couple were disappointed, and they were invited back to try again tomorrow.  "Maybe you need some time to read your piece aloud and make it sound how you think it should go," I encouraged.

Revision is tough for us all.  I think I might read this piece aloud before hitting the publish button.  It seems to be making all the difference today.
Posted by Emily Culbertson at 4:09 PM